skip to main | skip to sidebar

1.  I never want to build decks for a living
2.  There's no way I could afford to have someone build this thing

Decking continued!  Almost done.  (granted, I would have been done weeks ago, but I sort of stopped working on it in order to get moved in)

Cables going up on the back deck

Why, oh why did I make the deck so complicated?  I envisioned a decorative border around the outside in a different color, and 45 degree angles running away from the house....  What I didnt plan on was the 44.3 degree angles that you end up with when the deck is not PERFECTLY square.  What a giant pain.

I'm going on my 4th or 5th weekend working on the back deck, with a couple ringers thrown in the mix to help me get the job done.  It's been painful, it's drawn blood... but it's almost done.

Main deck done, with custom "V" shape.  What a PITA

Last section down, just need to rip the last board

This is my plan for the railing (thanks http://www.stainlesscablesolutions.com/)

No Gain Without Pain 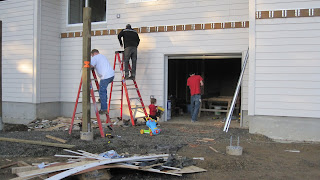 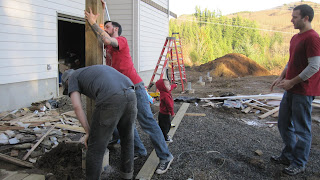 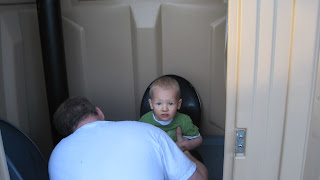 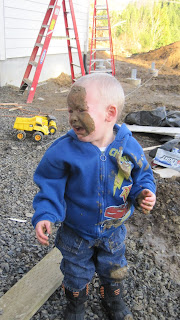 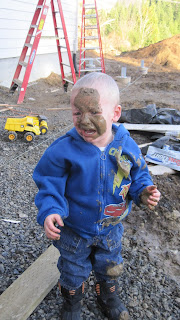 Lots of blood, sweat and tears (even Tyler's) are being poured into the last stages of the house. We are so thankful for all the friends that have lent a hand, it is literally impossible to do it all alone!

Weather certainly has played an interesting role. At times, it just holds back progress with both hands. Then out of the blue, the clouds part and there is warmth and sunshine...also mud, as Tyler can attest to!
Posted by Rhi at 9:07 PM No comments:

Well the house is done (at least from Adair's standpoint).  I did the final walkthrough with Gary and was handed the keys!  We still need to get the screens for the windows, and the drywall guys have a couple things they need to fix.  I have so much work to do to get it move-in ready that just the thought of it is pretty overwhelming.

Last weekend Erik and Joe came down from Portland and we battled the wind and rain to get the posts in the ground for my back deck.  This weekend, Russ and I worked on the deck Saturday and I went back out solo on Sunday.

Posts up, ready for measuring

We I have so much left to do it's sickening... but at least the house is still moving forward. The finish package was delivered today, and the finish carpenter was on-site all day installing cabinets. I couldn't really remember all the details we picked out until the all came together in our house today. I'm REALLY excited about the hickory cabinets, and out master bath vanity is MASSIVE.

Cabinets and trim staged in the living room

It must be official... here are the throwns!

Gary of Adair Homes has been working diligently to get Rhi, Tyler, Baby-to-be and I into our new home.  With this, bring some tight deadlines.

Gary let us know that our drywall contractor would be done on the 19th and that our finish package would be delivered on January 4th.  This seems like a long time in my mind.  All I had to do was paint the interior of the house... how hard could it be?  The answer:  REALLY hard.

It wasn't so much the technical skill that was needed, but simply a MASSIVE volume of tape, plastic, paper and Coors Light.  Adair said we didnt need to worry about the ceiling, so we just concentrated on the walls.  Boy, was that a mistake.

The drywall guys didn't end up finishing until around the 22nd or 23rd, and there was no way I was going to be working on christmas... so Russell and I started the project on Thursday the 28th.  I picked up the first wave of supplies, along with 40 gallons of paint.  20 primer, and 20 color.

The plan was to shoot 1 good thick coat of primer, and come back with 2 coats of color the next day.  After pretty much a full day of masking the ceiling, we were ready to shoot the primer.

When Adair tells you that you don't have to paint the ceiling, what they really mean is "If you live in a world where NOTHING every goes wrong, and where EVERYTHING is clean at ALL times... then you don't have to paint the ceiling."  I don't live in this world...  I asked Josh "So, what happens if we get the ceiling dirty?  Like my toddler throws a dirty tennis ball in the air for the dog".  His response?  "Wipe off the texture and call to have someone re-texture it".

It's 10pm in this picture... and I haven't started painting yet

But now it's done, and I'm still alive

From the Kitchen to the Living Room

Vaulted Ceilings in the Living Room

Living Room to the Kitchen